Will Luminous Trees be our Future Street Lights?

It may sound lightyears ahead, but in the near future, bioluminescent trees could easily replace Street Lights. Or would it be the road itself lighting the way? Bioluminescence, the ability of small organisms to behave like living night-lights, could lead to some remarkable advances in the public space. Here are some of the greatest examples we’ve ever seen!

Bioluminescence was “invented” dozens of times in evolutionary history. Scientists may now be able to explain not only why certain mushrooms glow in the dark, but they are nearer to create glowing trees as a novel form of street lighting.

Dutch designer Daan Roosegaarde – known from astonishing projects such as ‘Waterlight‘ and ‘Rainbow Station‘, among many others – is hoping to employ biomimicry to transform your average street-side trees into beacons of light. Like the luminescent abilities of jellyfish, mushrooms or fireflies, splicing DNA from luminescent marine bacteria would open a world of opportunities!

Glow in the Dark

Naturalists in the early 19th century identified fungal growth as the source of the glow from wooden support beams used to shore up mines. Many fungi and mushrooms are now known to glow in the dark, and explanations for why they do it range from it being a useless by-product of metabolism to a sophisticated anti-predator adaptation. The best explanation seems to be that the night-light attracts insects and other animals to the fruiting bodies of fungi, who then spread the spores far and wide.

Fireflies are likely the best known example of bioluminescence in nature. The insect controls the light it emits from its light organ by adding oxygen to a mix of other chemicals involved in the light-emitting reaction. As larvae, the light acts as a warning to predators that they don’t taste very nice, and as adults the light is used to identify members of the same species and to attract the opposite sex.

I am thrilled to see how bioluminescent technology finds its way in various in- and outdoor applications and how it contributes to a safer world! I am sure this is just the beginning of many more to come!

END_OF_DOCUMENT_TOKEN_TO_BE_REPLACED

By the end of February, 2015 Westervoort hosted the world premiere of ‘Waterlight‘. The latest artwork by Daan Roosegaarde is described by first visitors as the “the Northern Light of the Netherlands”.

From February 26 to March 1st, visitors could experience Waterlight in the flood channel of the river IJssel near Westervoort. Waterlight reveals the invisible artworks of the Netherlands, and will appear throughout the Netherlands in the coming years. 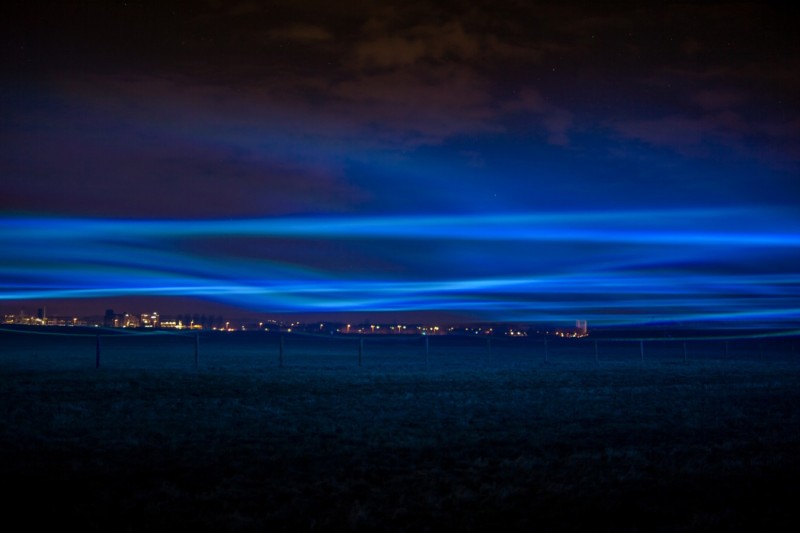 Waterlight is the result of a collaboration between Studio Roosegaarde and the Dutch water board Rhine and IJssel. “A combination of awareness and a dreamscape. By adding – aside from the latest LED-technology – experience and perception, we create a virtual flood.” says Daan Roosegaarde.

“Not our dykes, but our water consciousness is the weak spot in our flood protection”

The artwork Waterlight consists of wavy lines of light across an area of over 4 acres. Walking on the dike the light lines are perceived as high water, once in the flood channel you find yourself in an underwater world. The water boards are pleased with Waterlight.

“In Waterlight people experience what the Netherlands would look like without their dykes” says Hein Pieper, chairman of water board Rhine and IJssel. “Awareness is crucial, because the Dutch (water)artworks need every day maintenance and our national water awareness is the foundation of that maintenance.”

Dutch water works are unparalleled by any other country, but the water awareness leaves a great deal to be desired!

Every night for a moment: Rainbow Station

Together with astronomers of the University of Leiden, Roosegaarde unravels light efficiently into a spectrum of colours. Via new liquid crystal technology which is developed for research on exoplanets, Rainbow Station takes the exact shape of the 125 year old historic station roof.

Rainbow Station: Ode to IYL2015
The artwork marks the celebration of the 125th anniversary of the railway station, and the start of the UNESCO International Year of Light 2015 – IYL2015.

Rainbow Station can be seen every day for a brief moment within one hour after sunset at Amsterdam Centraal Station (east side, platform 2b). The light and colour offers the fifty million travellers a year, a magical moment at night.