Experience the Vulnerability of Water
Following the Artist Daan Roosegaarde latest installation “Waterlight” in Westervoort back in February, Studio Roosegaarde lets the visitor experience the almost forgotten power and vulnerability of water again. This time, the Museumplein in Amsterdam is hosting a 3-day public light art event to raise water awareness end emphasise the beauty and power of light. 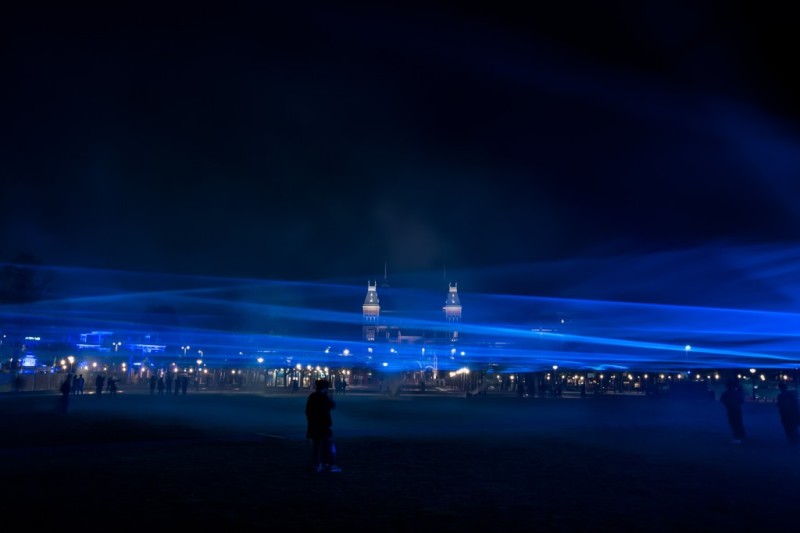 As a virtual flood, Waterlight shows how high the water could reach without human intervention.

Public Access and Openings
“Waterlight by Roosegaarde” is open to the public and can be experienced from May 11 – 13th between 22:00 and 00:00 at the Museumplein in Amsterdam.

WATERLICHT is the dream landscape about the power and poetry of water. As a virtual flood, it shows how high the water could reach without human intervention. Innovation is within the DNA of the Dutch landscape via its waterworks and creative thinking, yet we’ve almost seem to forgotten this. WATERLICHT is a powerful and poetic experience to remember.

WATERLICHT consists of wavy lines of light made with the latest LED technology, software and optics. First created for the Dutch Waterboard Rijn & IJssel in Westervoort, the artwork has now travelled to Museumplein Amsterdam.

Photos in this post are courtesy of Studio Roosegaarde/Pim Hendriksen.

Every night for a moment: Rainbow Station

Together with astronomers of the University of Leiden, Roosegaarde unravels light efficiently into a spectrum of colours. Via new liquid crystal technology which is developed for research on exoplanets, Rainbow Station takes the exact shape of the 125 year old historic station roof.

Rainbow Station: Ode to IYL2015
The artwork marks the celebration of the 125th anniversary of the railway station, and the start of the UNESCO International Year of Light 2015 – IYL2015.

Rainbow Station can be seen every day for a brief moment within one hour after sunset at Amsterdam Centraal Station (east side, platform 2b). The light and colour offers the fifty million travellers a year, a magical moment at night.